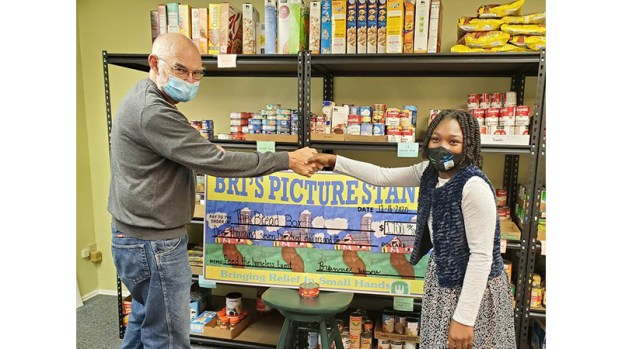 President of the South Hill Bread Box Dana Debaets, thanks Brianne Latimore for raising $1,700 in the effort to fight hunger.

At the age of 8, Brianne Latimore a student at South Hill Elementary, found her love for drawing while taking an art class.

Now a year older, Latimore has taken that passion and turned it into a fundraising effort for those in need.

According to Latimore’s mom Courtney Latimore-Harper, her daughter decided she wanted to make money with her many drawings and somehow give that money back to the community.

“She’s a kid who really wanted to be a part of helping and actually being hands-on and doing things like helping in a soup kitchen,” Latimore-Harper said. “But due to COVID, that was not possible.”

Brianne chose to make her mark on fighting hunger by donating funds to the South Hill Bread Box to help feed the homeless in Southside Virginia.

Latimore-Harper said that her daughter came up with the idea of donating a drawing for each donation made and giving the funds she raised to the Bread Box; also, each box contained one of her drawings.

Through Facebook, flyers and word of mouth, advertising the business Bri’s Picture Stand was born.

Latimore’s grandmother, Patricia Harper-Tunley of Lunenburg, said she is humbled and grateful for the efforts and the compassion of her granddaughter to help others.

“Brianne’s concern for others at such a young age is not only refreshing and also is attributed to her parents for raising such a wonderful young lady,” Harper-Tunley said. I look forward to seeing what she will do as she gets older and makes her mark on the world.

Throughout all of her fundraising efforts and even when her parents asked her what she wanted for Christmas, Brianne said, “I want everyone to have a home for Christmas.”