“This award is presented to an officer who has made a significant contribution to improving the image of the animal control profession in his/her community.”  VACA stated in a press release. “VACA recognizes now, more than ever, the tremendous work performed by many outstanding animal care and control professionals throughout Virginia.” 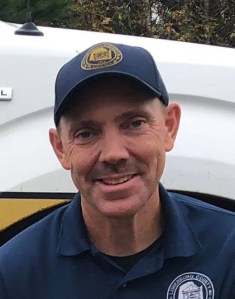 Elliott is known for his passion for animals and for spending the past five Thanksgivings Ruff-N-It for the animals.

This Thanksgiving Day was no different as Elliott spent Ruff-N-It in “lock up” from 6 a.m. to 6 p.m. at the Lunenburg County Animal Shelter located at 1320 Old Mansion Road to raise awareness to the community of the over population of cats and dogs in Lunenburg County and the need for having animals spayed and neutered.

Elliott said the last four years have been very successful in raising awareness and providing funds to help neuter and spay those animals, but that the Ruff-N-It Campaign is not about him or what he does.

“I’m just giving a little of my time,” Elliott said. “Twelve hours without any food is not that bad for me but think about that dog that someone dumped out … he might be able to find him a little water somewhere but not food all the time.”

Elliott said pet overpopulation is a big problem in Lunenburg County, but he has seen a significate drop in the population rate this year, and he is hoping that the Ruff-N-It Campaign continues to drive the pet population down.

In 2019, Elliott said the number-one problem in Lunenburg County was the overpopulation of cats.

“There were over 100 cats and 300 dogs that were released by owners. These cats and dogs have often not been spayed or neutered, and the cycle begins again of homeless animals.” Elliott said.

“I am very honored to receive this award, but this is not a reflection of me, it’s a reflection of the community and what they do,” Elliott said. “I am thankful to those who donated to the Southside SPCA, to Sandy Wyatt and Francee Schuma and staff at the Lunenburg Animal Hospital for all of their help.”