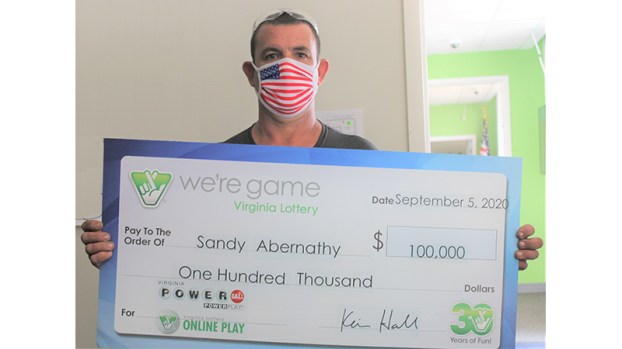 Sandy Abernathy was the winner in the Sept. 5 drawing on the Virginia Lottery’s Powerball.

Sandy Abernathy didn’t have to leave his home to win $100,000 playing Powerball. The Lunenburg County man bought his ticket for the Sept. 5 drawing on the Virginia Lottery’s website.

Three days went by after the drawing before he discovered he’d matched four balls plus the Powerball number.

“I didn’t know if it was real,” he later told lottery officials.

Abernathy said he has no immediate plans for his winnings except to buy a new riding mower.

Powerball drawings are held at 10:59 p.m. Wednesdays and Saturdays. The odds of matching all six numbers to win the jackpot are 1 in 292.2 million. The overall odds of winning any Powerball prize are 1 in 25.

Authorized by Virginia voters in a successful 1987 referendum, the Virginia Lottery generates more than $1.7 million per day for Virginia’s K-12 public schools, according to a press release from Virginia Lottery officials.

Officials: County is at high risk

Recycling event was a success

LCPS looks for children in need of special services

King sentenced to more than 53 years for murder